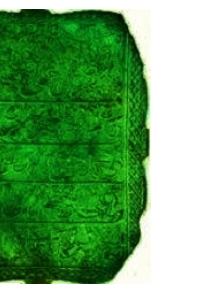 “As Above, So Below. As Within, So Without.”

You may have heard this very common phrase before. Perhaps in a meme, on a “witchy” tank top at Urban Outfitters or hopefully 🤞🏾 in the context of someone named Hermes Trismegistus. It’s the first line of the Emerald Tablet or Tabula Smaragdina, one of the first things I had to commit to memory as a central text in the Hermetic tradition. Did you know all of the versions we know of and use today are translated from this first 8th c. version written in Arabic (see below)? It wasn’t translated into medieval Latin until about 4 centuries later.

The Emerald Tablets were first discovered by Apollonius of Tyana (known as Balinas in Arabic) who according to the texts received the tablet from Hermes himself. He was a 1st c. contemporary of Jesus عليه السلام* – an alchemist, astrologer and most notably a well known ascetic Neo-Pythagorean, Hermetic philosopher. The discovery attributed to an encounter where he was led to a cellar, directly to a statue of Hermes with a book underneath1, upon which he had a vision…

Even though it was centuries after his death, Apollonius was a very well known figure in the medieval Islamic world. The Arabic recensions of his works such as Kitab Sirr al-Khaliqa كتاب سر الخالقة ‘The Book on the Secret of Creation’, also named Kitᾱb al-῾ilal كتاب العلل ‘The Book of the Causes’ (which contained the Emerald Tablet) were key references for all things alchemy, astrology and cosmology during the European Renaissance until now in the Western world. In fact all of the earliest and most complete works attributed to Appolonius are in Arabic. The lost original of the Emerald Tablets are attributed to the Hellenistic time period, most likely translated into Arabic from Syriac or Greek.

WHAT IS IT EVEN TALKING ABOUT?

The Emerald Tablet is probably one of the best examples of a mystically cryptic text. There are layers and layers of instruction and references encrypted in these few lines that light up and make sense to different people, depending on what time period, level and subject of training the reader is currently at. The term “hermetically sealed” comes from ☿ Hermes AS (more on him later).

In the words of Apollonius, it taught him “the art of nature and the science of the secrets of creation”.² Depending on the translation it could even be a treatise on the making of talismans, which isn’t far-fetched in the slightest, given that he is repeatedly referred to as Master of Talismans (sahib al tilasmat) in Arabic occult traditions.

The Emerald tablet explains “in mystical language how to produce an elixir made by the sun and the moon, fertilized by the wind, fed by the earth, comprising the power of the upper and lower worlds, revealing the light of lights (nur al anwar) and eliminating the darkness.”³

* عليه السلام: alayhi salam, peace be upon him. Often abbreviated in English as AS. A blessing commonly spoken after the mention of a prophet or messenger’s name.

A liminal space between worlds discussing all things 〰️magic, 〰️metaphysics, and the 〰️occult in the contexts of the Muslim diaspora.

Begin typing your search above and press return to search. Press Esc to cancel.